Music Monday, Monday whatnot, and what ever else in the blogisphere I can cram into this post.

The gratuitous super cutie Owl snaps, though I cannot credit them. Maybe google can.

Now for the knitting news....

I found the hat needles!  LORDY, you can't believe what a boost in morale this is.  And the two cakes of Madeline Tosh for the Peace Cowl at Ravelry. Over 20,000 women, from all over the world, are knitting this pattern. 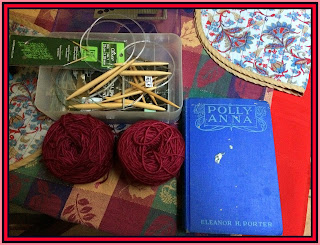 Also, I found Polly Anna, one of mother's long time favorite books from her own childhood, which she had stashed in a box in the mountains of stuff in her little room after Psycho Dad lost the house.
I remember her telling me, as we worked in my garden, about the impending doom coming yet again, in her life.  She sadly said, "No one can help us."

She kept the books for our daughters, and probably meant to give them all of Polly Anna's adventures as well as some others .  She had about 15 children's books, some of which were donated to our library for their sales, and some of which the twins, who also love children' books, took home this New Year's.
Polly Anna was a comfort to my mother, who had lived through disappointment and heart ache her entire adult life.  My sibs and I are forever grateful that she went quietly in her sleep one night, two weeks after her 64th birthday.  She'd done all she could to stand by her commitment and wedding vows to a man who honored neither her, or any of his vows.

And now, for something different.  Here is that set of  sock knitting Circs I've been rambling on about.  I'll get another one like it as soon as I'm sure my hands can handle such a tiny circumference.  I have a slightly larger experimental one that was sent to me from a friend's stash when she passed away.  The "old school" woven steel "cord" will never break, but it is just a little bit stiff.

What a terrible year, was 2016.  I hope that all of you who can feel what's coming have some sort of "great escape" from this newest Tragedian Angst.  Take a mental vacation from time to time.

Remember, sometimes Evil has to fully expand before it crashes down and implodes into itself.  So, don't get caught under it.
Posted by zippiknits.....sometimes at 12:00:00 AM