As per another recent post, Wolfie has been struggling with his tummy.  He looked stressed and a little sad . 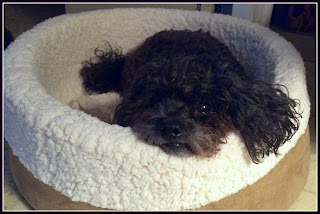 He had started some serious gagging when faced with his old food, apparently wishing to make a point to the brain dead humans.  So, Mr. Z decided to consult the company's product expert at PetSmart, and yes, they did advise that we switch to a Senior formula .

The change was what he needed.  He's too smart to put up with eating the same thing night and day for 4 years, but also he needed Senior formula.  He gets a Noon treat, the heart shaped one .  It made sense to switch both out.

Here he is, showing off, while he "helps" me with the crosswords.  Maybe he's trying to "hear" the words ? 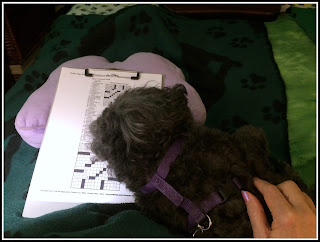 Finally, after changing his food last year, we did another change to Senior formula, and also changed his noon treat to this cute thingie.  He loves them.  So we went from feeling that his time may have come because some adhesion (from being kicked around in his former life) was strangling his intestines, to seeing him be his happy, bouncy, little self again. 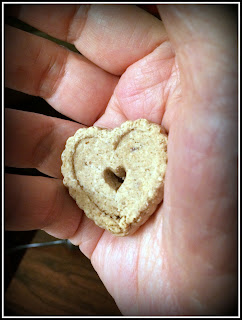 He thinks these are yummy, and I think they are adorable.  So now, they are "immortalized".

And now for the Hummingbird wars:

A new, and young, Anna's Hummingbird came and took possession of the Cape Honey suckle.  The Allens' had all probably gone further south before the freezing weather hit here.  So, new little Anna's was doing his mating flight for several days until Old Anna's showed up.  The battle was on.  Sadly, the new little fellow didn't know all the moves.  He was killed.  Yes, Hummingbirds are aerial dive bombers, and they will go after ANY other bird.

I found him outside when I was going to visit my sister.  There, dead at my feet, near the front door.


There were the tiniest ants, the biting stinging kind, all over him.  So I picked his body up and started flicking them off.  Since his wee tongue was stuck to the cement, he was so very dead.  I went into mourning almost right away.  You get a little scatty like that when you're trying to recover from loss. Just let it flow and don't apologize.  Wallow in it for that tiny time it takes you to overcome seeing your favorite bird laying dead at your feet.
Later, in the Jeep, I took his picture because he was such a beautiful creature, even in death.