Our Country, Our money, + a bit of yarn and knitting, Madame LaFarge has been busy.

A hedgehog rescue story ( here linked ) is in keeping with the Tuesday Tails theme.  And it's some fun before the political stuff ensues.

Grist calls this the most brutal ad I'll see this campaign

As David Roberts says: "I don’t think this requires much commentary, do you?"  (Thanks for the "Heads Up" from Mr. Z.)

Oh, by the way, whose families does Romney promise to help?  Is it the families of the people who have been hurt by what Romney and his "friends" have been doing?  And further more, what can we do if the Earth decides it's also had enough of human brutality and starts flicking us off into Space?

Ah, The Democracy:  Since a Democracy vaporizes when the  majority of eligible voters stay away from the polls and do not vote, I hope you all will exercise your constitution right, and responsibility, to go to the polls.  This may well  be the most important election that we've had in over in 50 years.  There is a lot to get back.

The Middle Class* got hammered over the past 45 years, and needs back it's rights, and it's tax dollars.  We have to insure those dollars are spent properly to re-create a future for the kids!  Let's do it for the kids, if not for ourselves.

Private companies, and the Banks, have been sucking on our financial bones, gambling that they will get bailed out after stealing from us yet again.  This goes all the way  from commercial banks being deemed (twice) as "too big to fail", to private contractors in war zones not running mess "tents" for the convenience of hungry soldiers.  This is because they've contracted with the Military to run the "Mess", and do so for their own profit.  How is this possible?  Because consultants for these company are many times ex officials from either Congress or the White House "Military" establishment, meaning cabinet members.  Incest there at the "revolving door" is rampant.

Then there are corporations building detention centers, privately run "prisons",  to house "teenagers" who don't toe someone's imaginary line.  The information is all out there for us to read.  It's all true, and it's all disgusting.  We do need to care deeply about what's happening, and we need to stop it.

*By Middle Class, I mean the traditional one; the one that existed before the term was re-invented to include incomes of more than $100,000 per year.

"On Tuesday we celebrate nearly two and half centuries of peacefully choosing our elected leadership.

We may disagree on some things but we all agree on this—your vote is your voice. It matters.

If you haven't had the opportunity to vote already, make sure to vote your choice at the polls on Tuesday.

And now for something completely different - A Boring Knitting report, though it does keep faith with Madame Lefarge's extra long scarves, sort of: 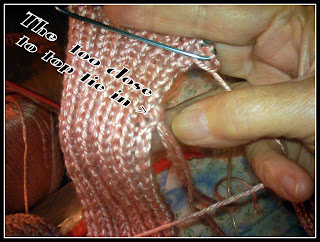 The yarn is Paton's Silk Bamboo, and it just doesn't felt.  But, it's really a beautiful looking yarn and very soft.

While knitting the second tie for Ele's cardi, the surprise knot showed up.


After having to join yarn very near the end of one tie for Stardust,  I was happily knitting the second tie when a knot appeared in what I thought was going to be a flawless bit of knitting done from a new ball of yarn.

Instead of flawless knitting, a knot showed up, sliding across my index finger at the worst possible time.  I suspect that all yarn companies are capable of such insults now, and their products must be rolled into balls to avoid such nasty little surprises. This knot was a shock, as most are!  Off with it's Head!

I threw the whole thing back inside the bag and went off  to played Spider and Free Cell for awhile.  Yes, I am an over-privileged drama queen.

Monday was fitness and a trek out to the big hospital to have the surgeon evaluate "The Knee" for it's One Year check up.   I'm still hoping for some gold stars to stick on the day, at the last minute, before this publishes.

Update:
BIG Gold stars for my surgeons, and their staff.  Huzzah!  I've now been educated about all the clunks and grit sounds that a normal metallic joint can make.  I'm happy.  All is normal.

Email ThisBlogThis!Share to TwitterShare to FacebookShare to Pinterest
Labels: bits of knitting blah blah, Whose Country is this anyway??