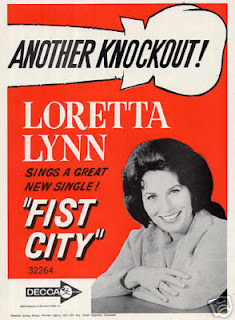 Want to play?  Or see other participant's responses?  Go HERE

1) This song is about a wife warning another woman off her man. Who received the last warning, of any type, that you issued?  Wolfie.  He was being a little wild and crazy.  I warned him to calm down.  He seems to get a wild hair every once in awhile.

2) Loretta sings that when her husband picks up trash, he puts it in a garbage can. She's being metaphorical, but we will be literal: If you spot litter on the sidewalk, do you pick it up or just walk on?
If it's not too Grotty then I'd pick it up.  "Too grotty" usually gets poked with a stick to spear it.  I've helped to clean up areas at the beach.  Oh UGH!

3) She taught herself to play guitar. If you could learn something new in 2017, what would it be?
Oh, my.... I want to feel all "Zen Master" again.  So would that be mastering my soul?

4) She broke her shoulder in a fall and surgery was required to repair it. When were you last in a hospital? Were you a patient or a visitor?
I was a patient a few years ago.

5) In the 1970s, Loretta Lynn was the first country singer to appear on the cover of Newsweek. Who is your favorite country singer?
Johnny Cash will always be numero Uno.  But then there is Billy Dean, who sang, "Thank God I'm a Country Boy"  Billy Dean.

6) Rowan and Martin's Laugh In premiered in 1968, when this song was popular. What's the last TV show you watched? Did you watch it live, did you stream it, or catch it on DVR/Tivo?
That would be an episode of "The Gilmore Girls", streamed.

7) In 1968, Jacqueline Kennedy shocked the world by marrying Greek billionaire Aristotle Onassis.What's the last thing you heard that surprised you?
Can we add dismayed to this?  That would be Zilke.  It was such an egregious SIN that I posted about it.

8) 1968's top-rated car was the Chevy Corvette. Could your car benefit from a trip to the car wash this morning?
Probably, though it is a Jeep.

9) Random question: You're staying in a hotel and find you can faintly hear the couple in the next room. Would you ignore their voices, or try to hear them better?
I wouldn't stay in a hotel with walls that thin.  And no, I'm not interested in what they could be talking about.  I'd just put in earplugs, and never stay there EVER again.
Posted by zippiknits.....sometimes at 10:08:00 AM